June 2 – It was starting to become dry in parts of Missouri, and corn was showing signs of lack of moisture.

June 3 - Heavy rains caused flooding in Missouri, Illinois, and Wisconsin; however most rain was spotty.  Some areas got downpours; while those a few miles away were still dry.
Corn genetic symptoms (scattered onion leafing and leaf yellowing) or signs of “fast growth” start to appear in Missouri.  The corn quickly recovered within 3 to 7 days, with no impact to yield. 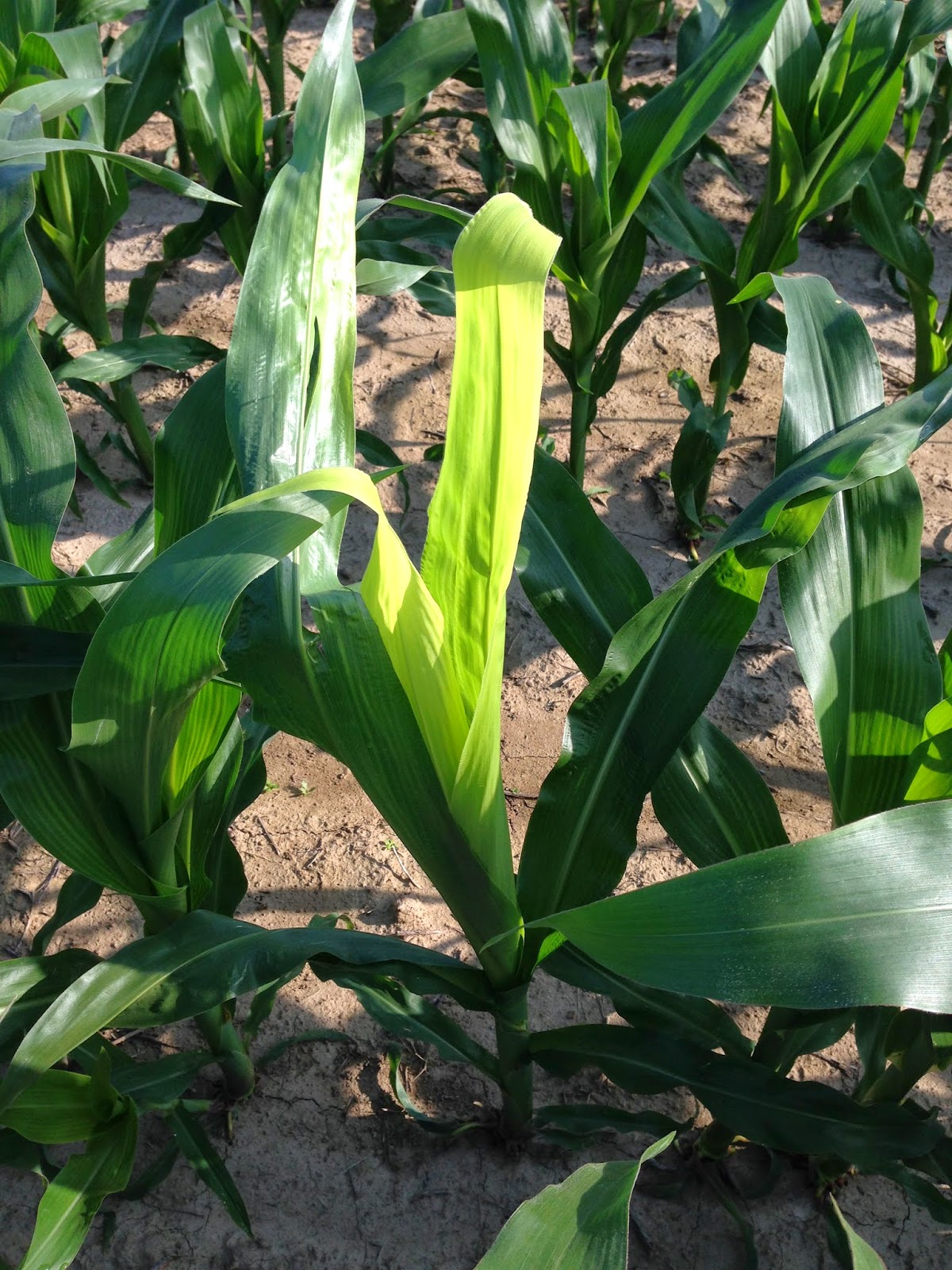 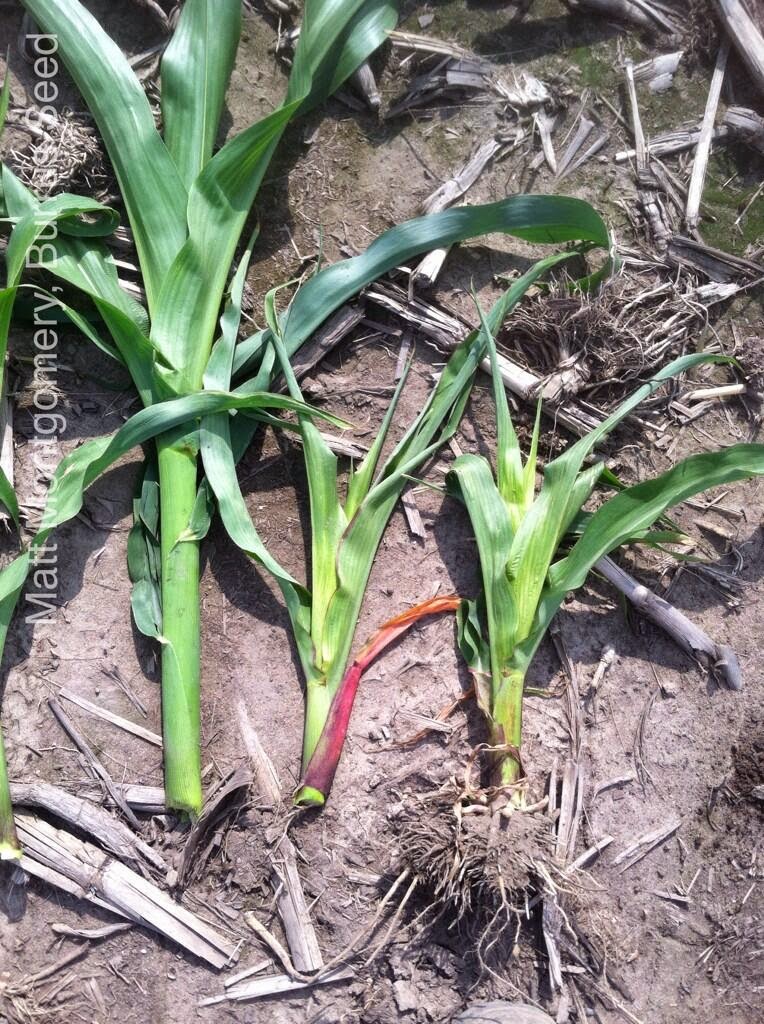 June 6 – Stalk borer injury started to become evident in Western and Southern Illinois corn, but this pest is usually not considered to be a major threat. 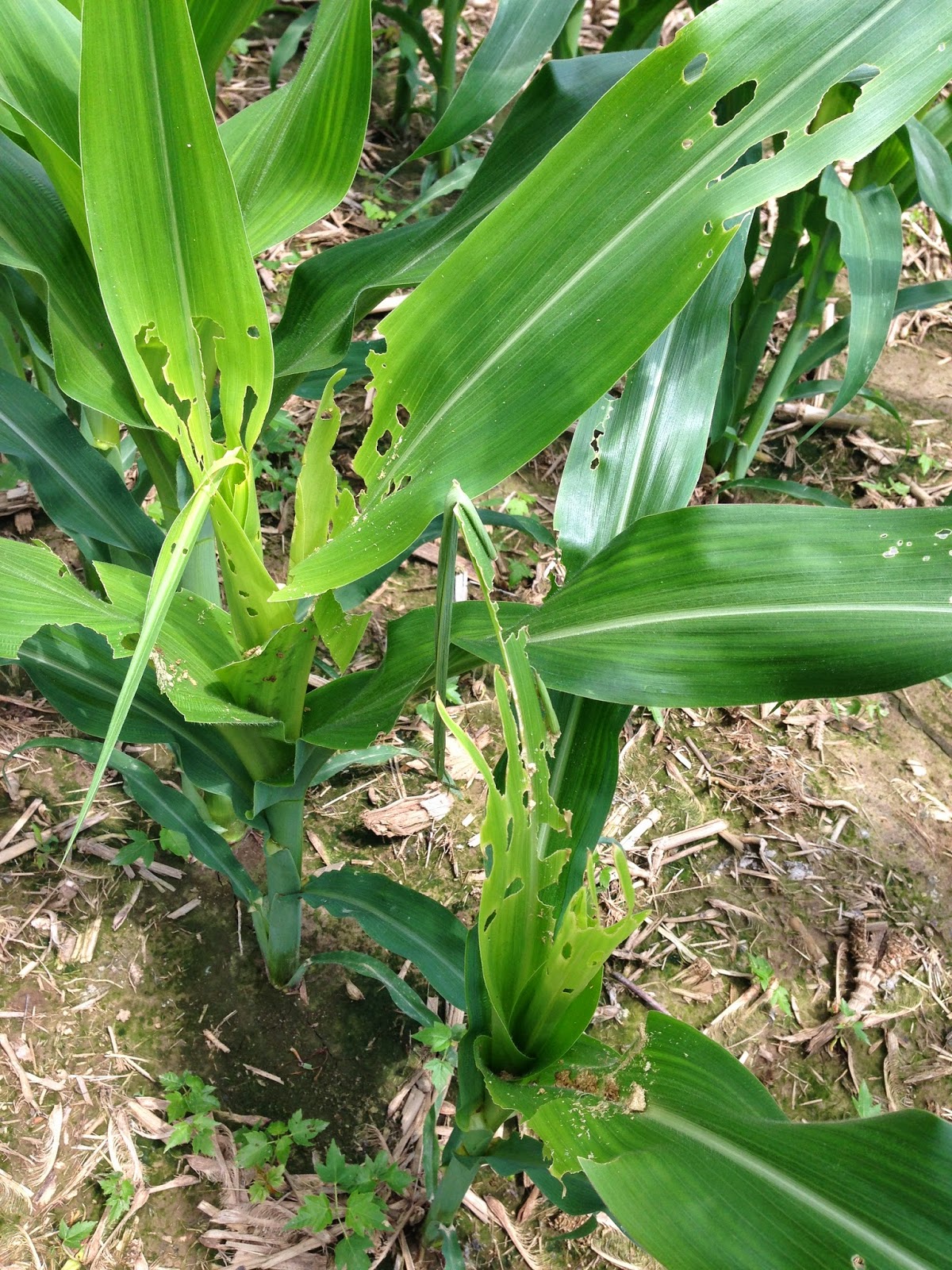 Early planted Missouri corn was growing fast and was reported to be “chest high”, while the later planted corn in Northern Illinois was around the V3 to V4 growth stage.  Plant growth regulator injury was found in Missouri corn. 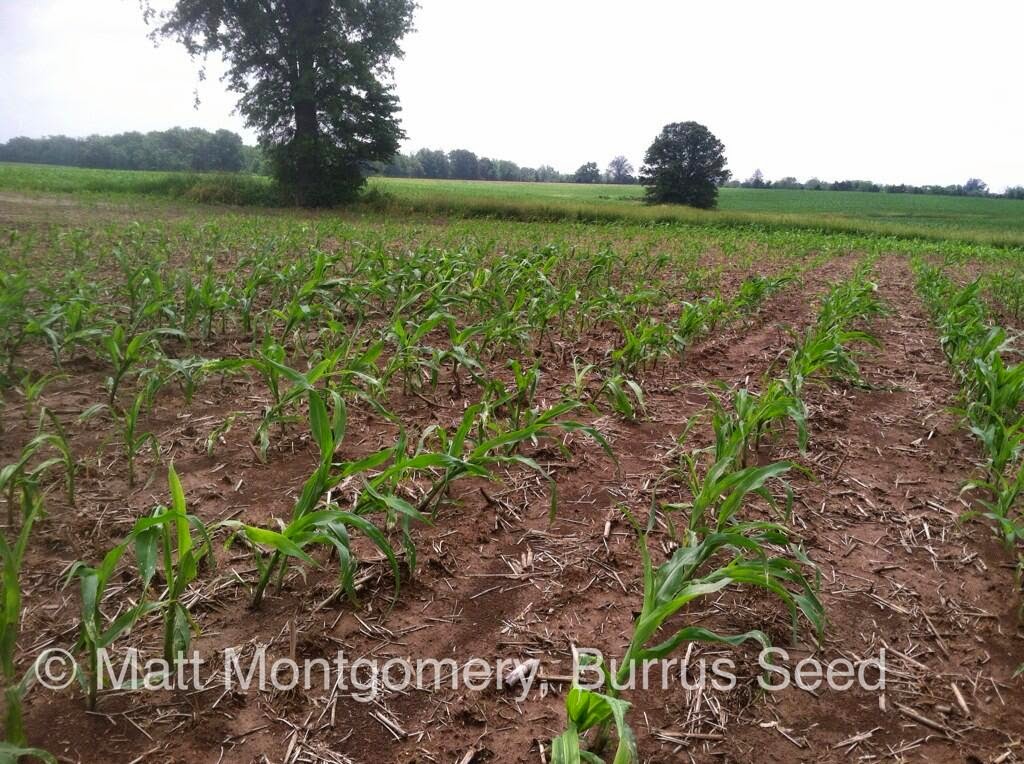 June 9 – Reports of yellow, striped, or purple corn (nutrient deficiencies) where root development had been compromised due to shallow planting, compaction, flooding, and so on.  ALS herbicide injury was found in corn.  It still remained extremely wet in some areas such as Southern Illinois.  University of Illinois spring surveys revealed low number of soybean aphids.

June 10 – “Twisted whorl syndrome” was reported in some corn genetics in Northern Illinois due to previous cool, cloudy weather, followed by hot, sunny weather.  This was an indication of fast corn growth and symptoms did not last long. 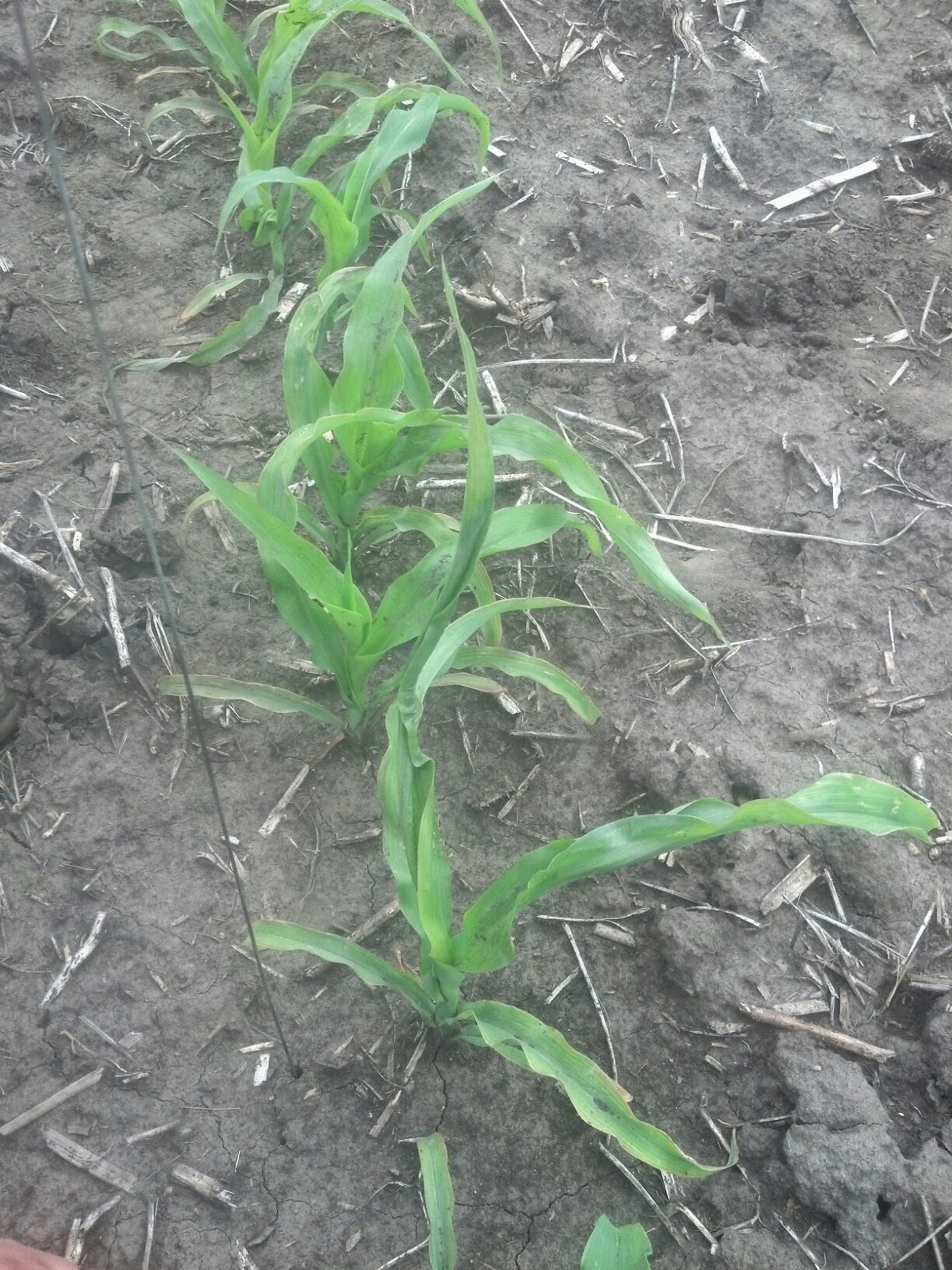 Plant growth regulator injury was found on some soybeans in Illinois and Missouri.  Nutsedge was reported by some as a problem this year, and there were high catches of corn earworm moths reported by the University of Illinois in Madison Co., Illinois.

June 11 – Soybean planting was said to be nearly complete in Illinois.  Elevated number of corn borer moths was reported by the University of Illinois in Pike County, Illinois as well as Southwest Missouri.  PPO herbicide injury was found in a Missouri corn field due to drift or tank contamination.

June 12 – The Illinois Water Survey reported that June rainfall was already well above average for much of Illinois.  At this point, some parts of Missouri had not seen this much precipitation during the growing season since 2009.  Heavy rainfall caused many to question about nitrogen loss in corn and many made additional nitrogen applications to corn around the V7 growth stage in Missouri.

June 13 – University of Missouri reported that they had seen more ALS herbicide injury to soybeans in the last 10 days than the last 10 years combined! 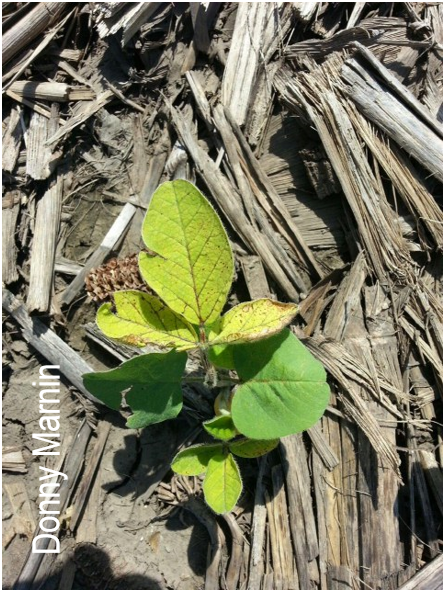 June 16 – Some corn was above 6 feet tall in Missouri, when corn in Illinois had not quite made the fast leap in growth.

June 17 – Bad storms in Southeast Iowa and Northern Missouri resulted in some hail injury to corn and soybeans. 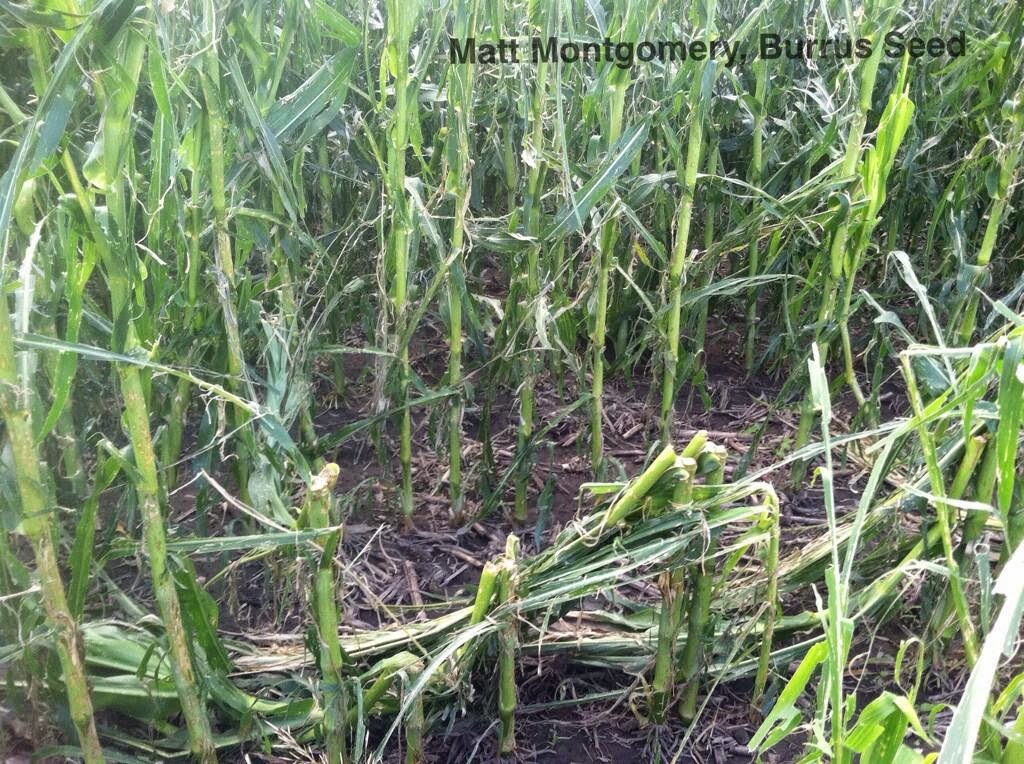 Soybean nodules started to develop and produce nice green growth in most areas of the Burrus footprint.

June 18 – Japanese beetles just started to emerge and reminded us that we will need to keep a close eye on corn during pollination. 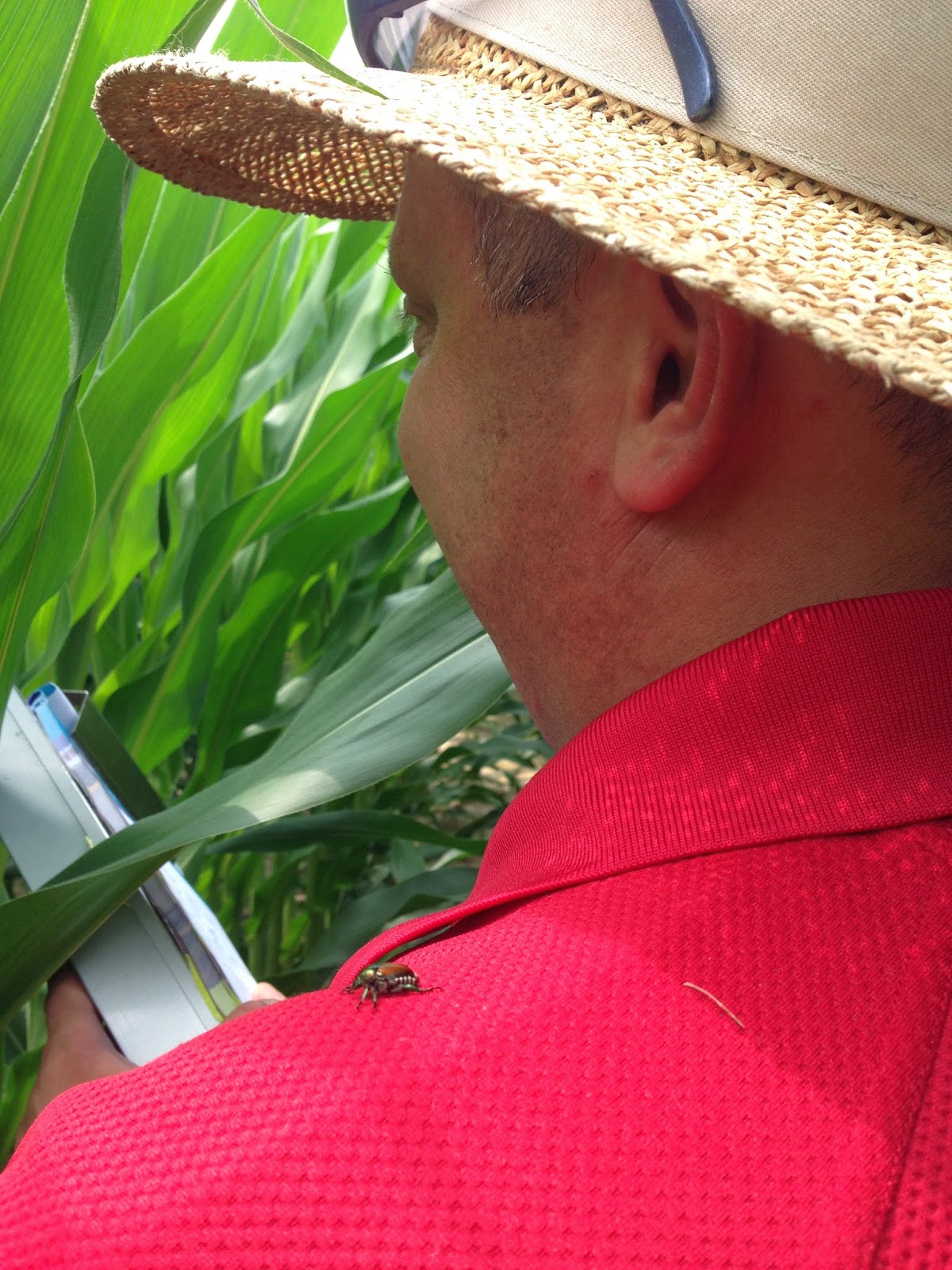 Another genetic symptom on certain corn hybrids signaled to us that corn was growing quickly.  Some genetics were growing so fast, their leaves were “sticking” down in the whorl and leaf edges appear “jagged” when they emerged.  There will be no affect to yield. 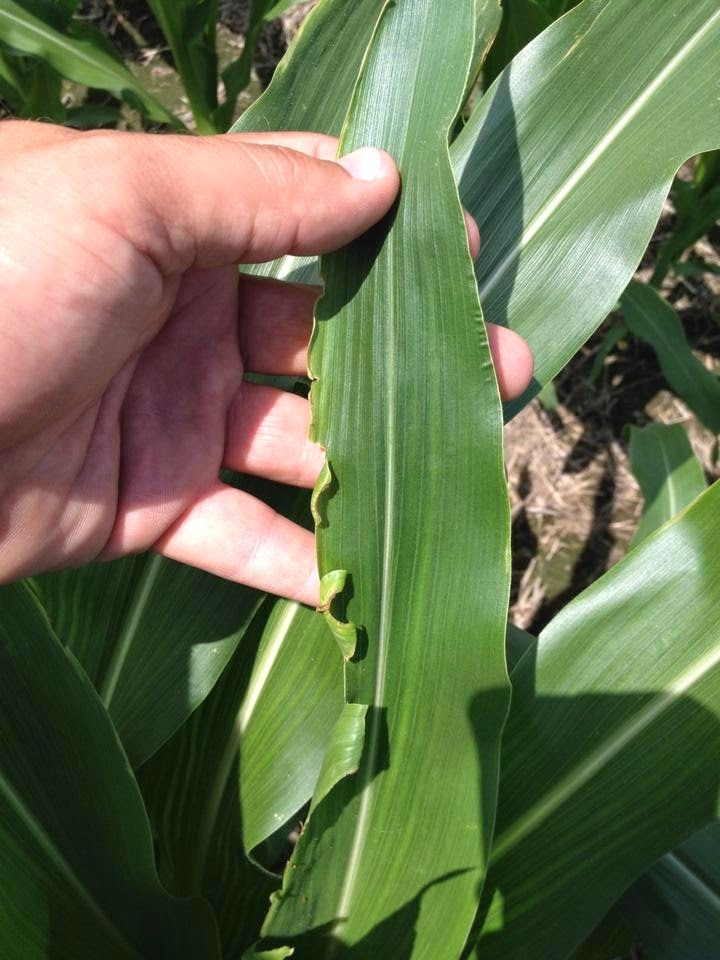 June 19 – Corn was growing unbelievably fast due to hot weather and abundant moisture.  Although some flooded corn roots suffered from lack of oxygen.  Signs of nitrogen deficiency was mostly due to lack of root mass, rather than loss of nitrogen.  Some Missouri corn was close to tassel.

June 20 – High dear populations continue to threaten corn and soybean fields in the river valleys of Illinois and Missouri. 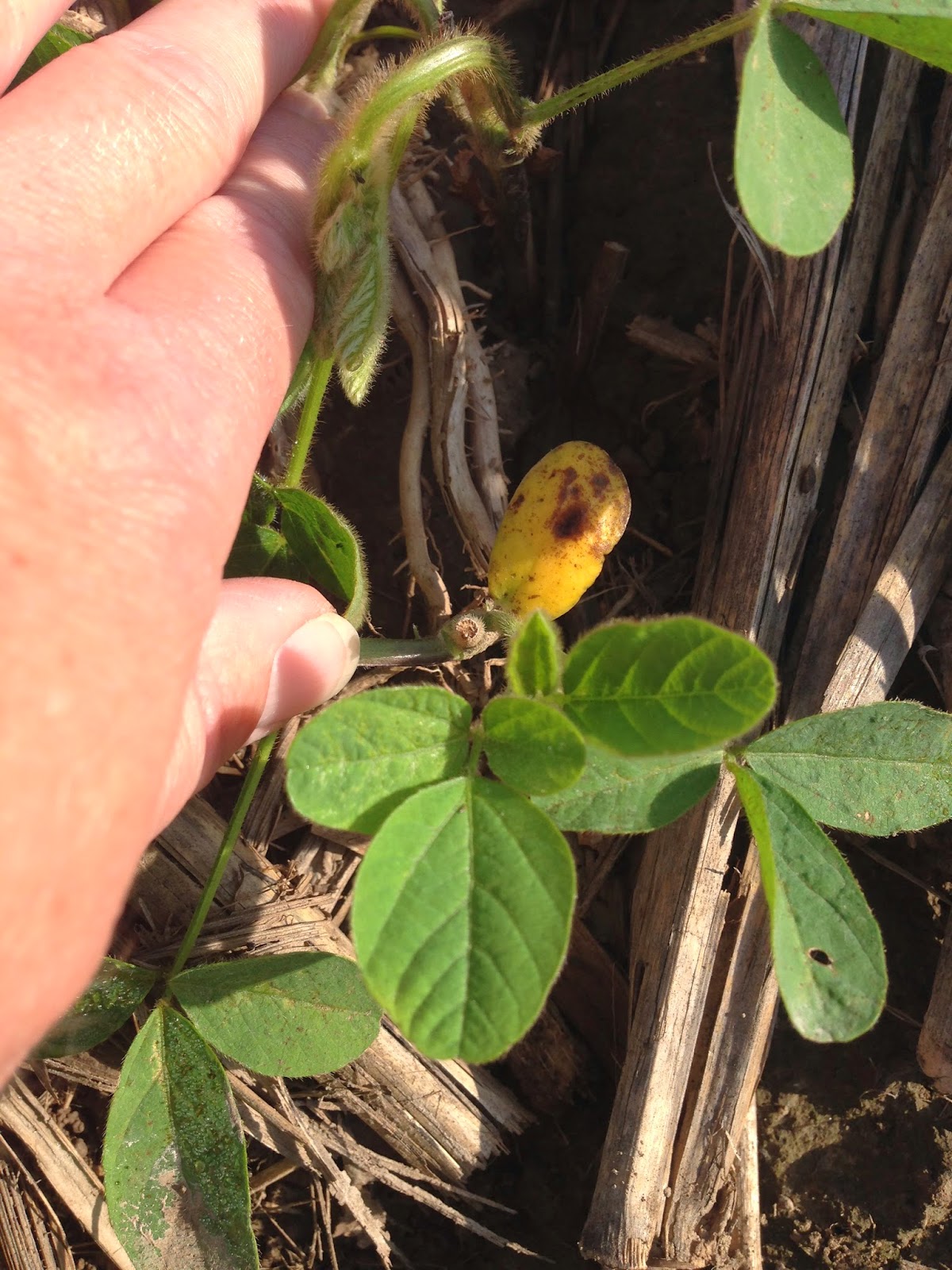 More PPO injury was found in corn due to tank contamination. At this time, herbicide applications were being made to not only soybeans, but also to late planted corn or fields that had been too wet.  Because of this, cleaning herbicide tanks after application became very important, especially when applying chemicals other than glyphosate this year. 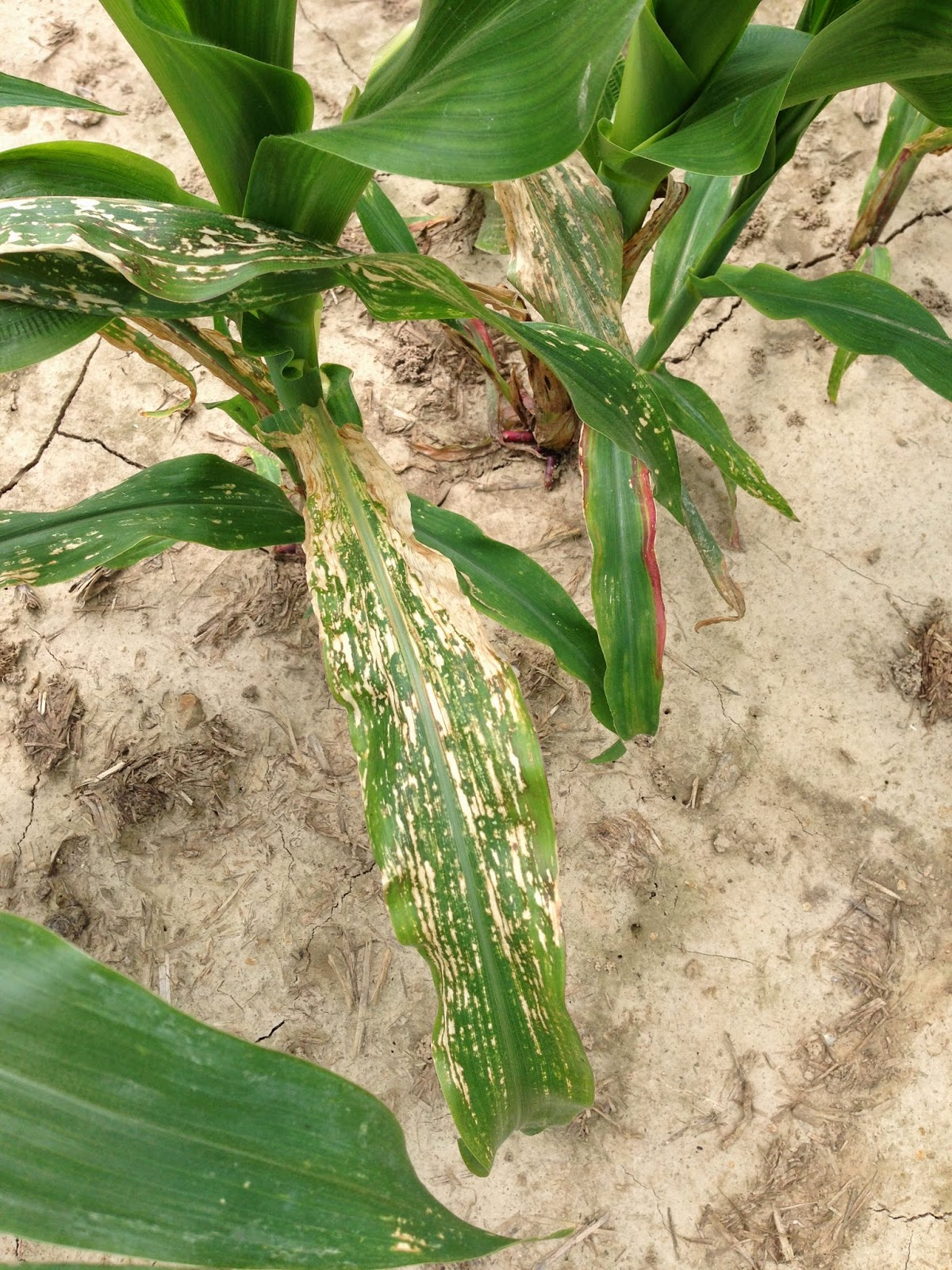 Overall, reports that were coming in across the Burrus footprint indicated an awesome corn and soybean crop at this time.  Some of the first corn tassels started to make their debut in Southwest Illinois. 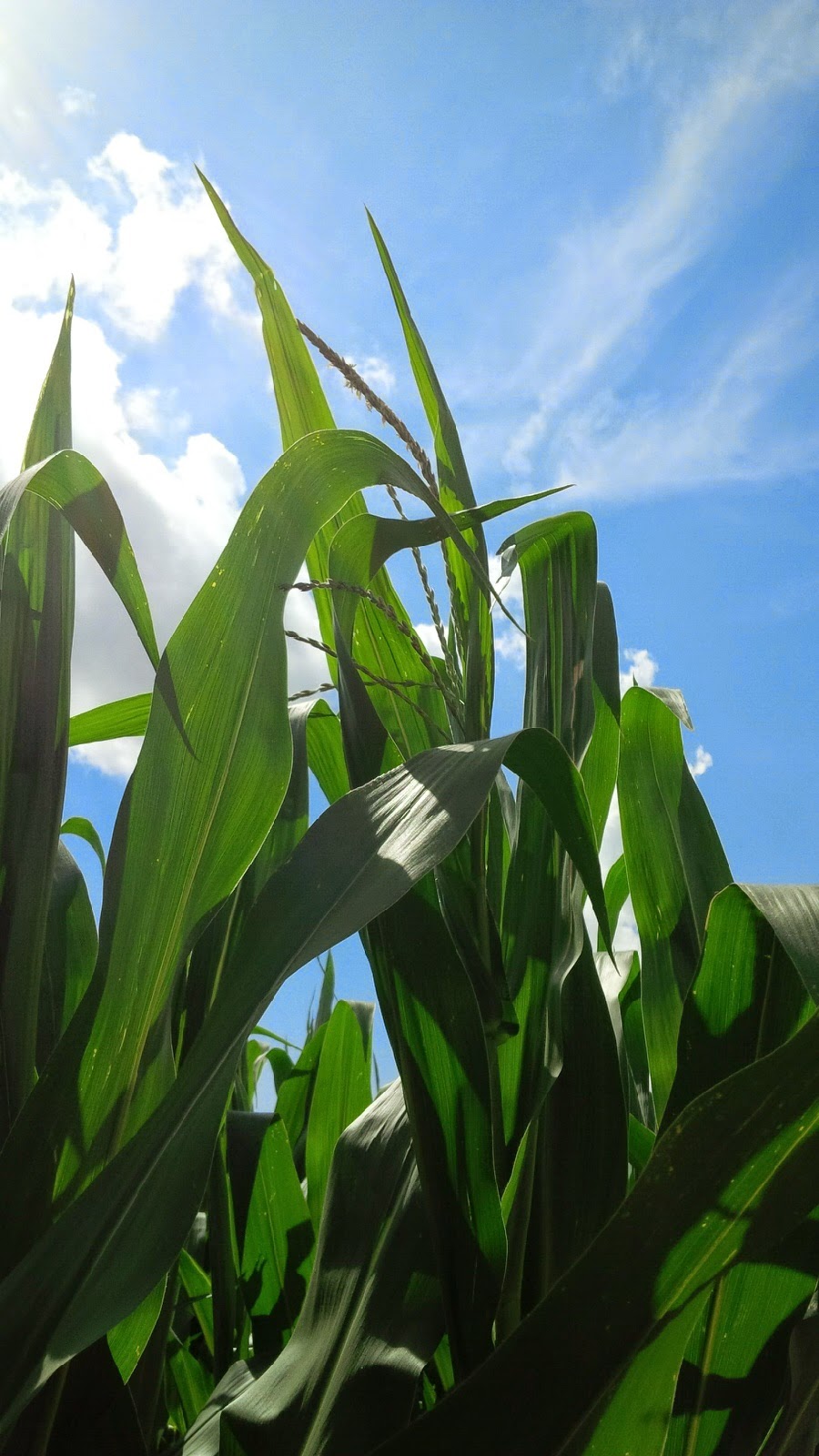 Some Missouri corn was developing ear shoots.  Wheat was ready to harvest in Missouri.  Some soybean fields with heavy residue were showing signs of past slug damage.  Potential heavy Japanese beetle catches were being reported in areas of Missouri.

June 23 – Storms that rolled through Western Illinois brought heavy rain, hail, and wind injury to some fields.  Nitrogen (NH3) burn and sidewall compaction of corn roots was found in Missouri. 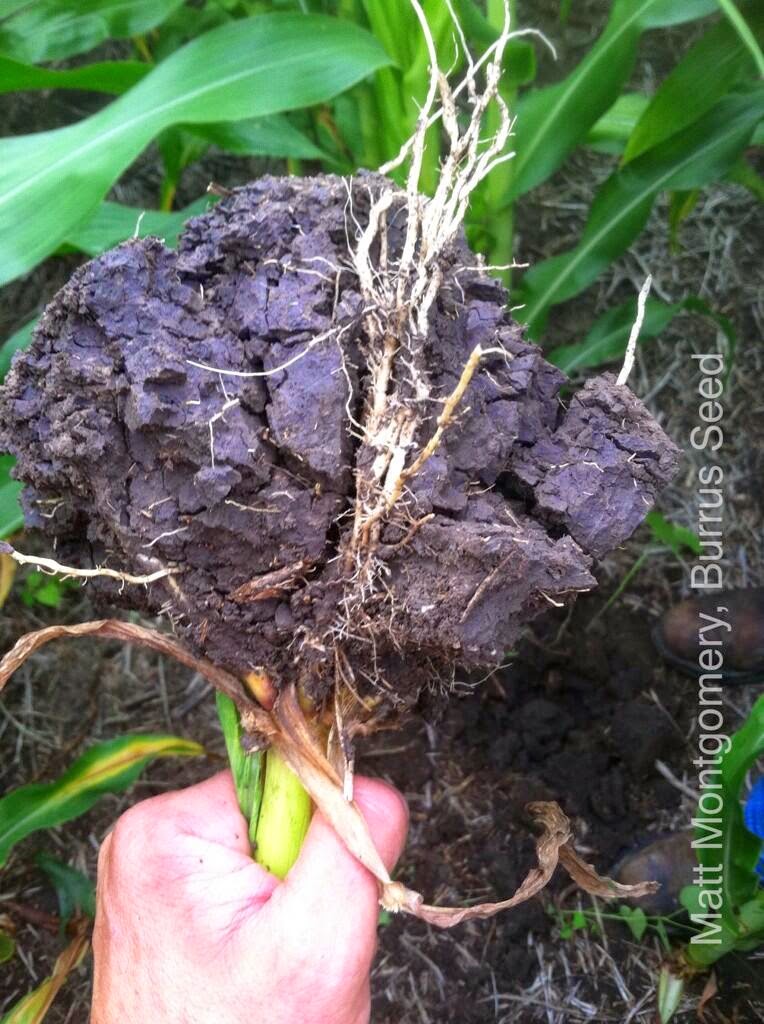 June 24 – Growth regulator injury was found in corn.  Diseases such as gray leaf spot and northern corn leaf blight were just starting to become evident on lower leaves in corn. 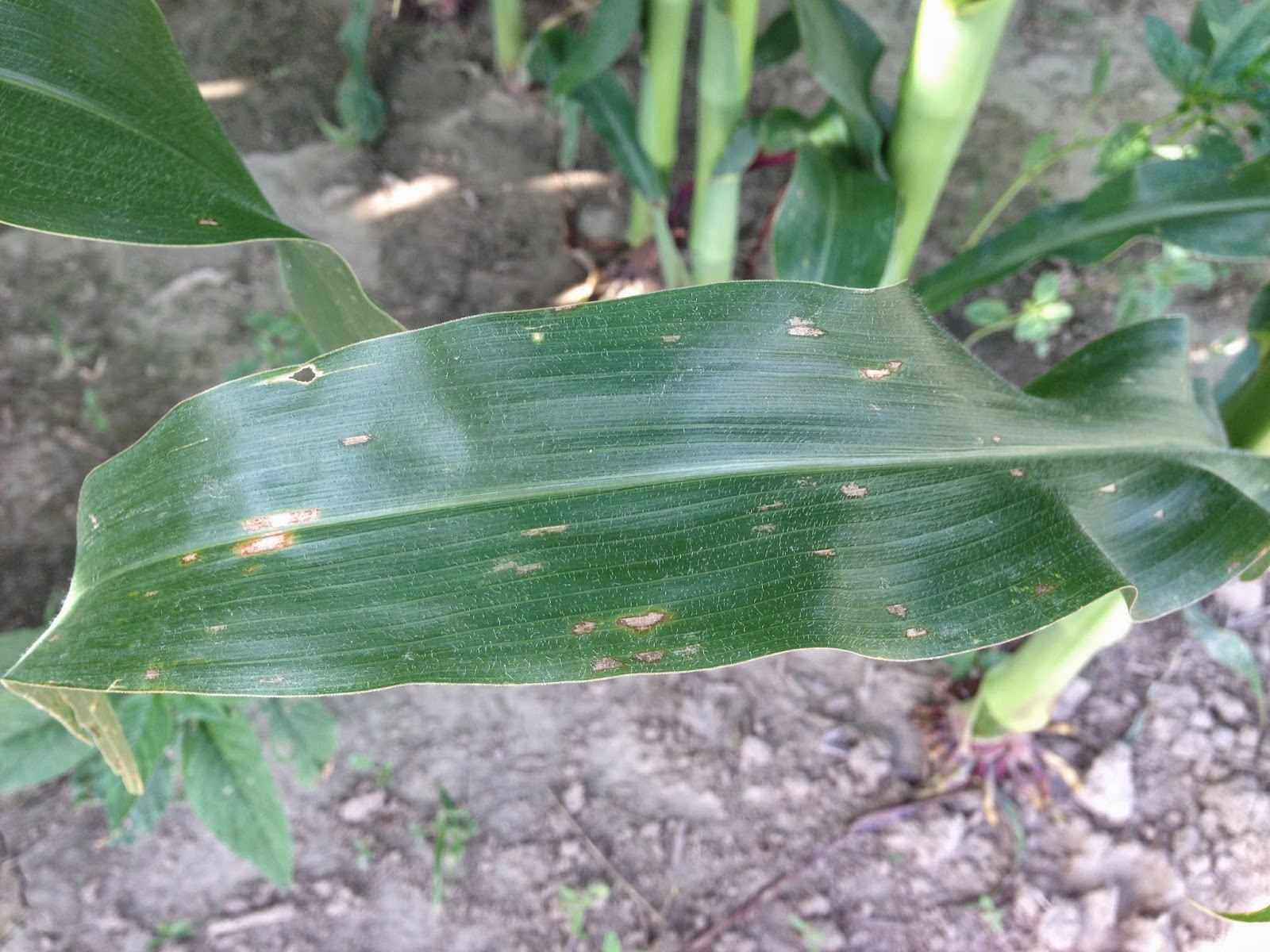 Watch these diseases during pollination as heavy disease pressure near the ear of the plant could impact yield and signal a need for a fungicide application.  Smut was showing up on corn (actively growing tissue) that had been injured due to insects, wind, or hail, but should not have a significant impact to yield. 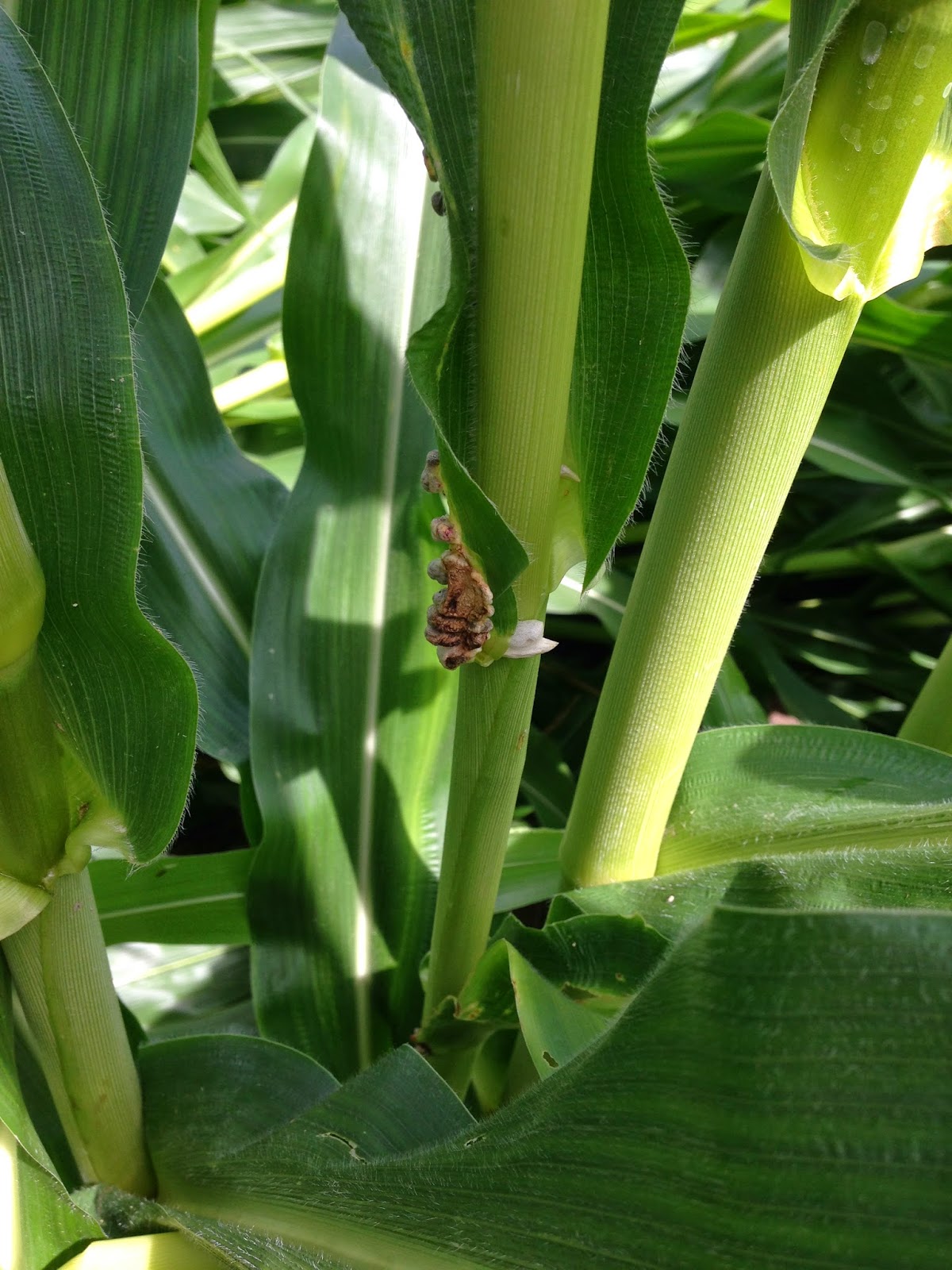 Another disease, Physoderma brown spot also should not have an impact to yield or a need for a fungicide. 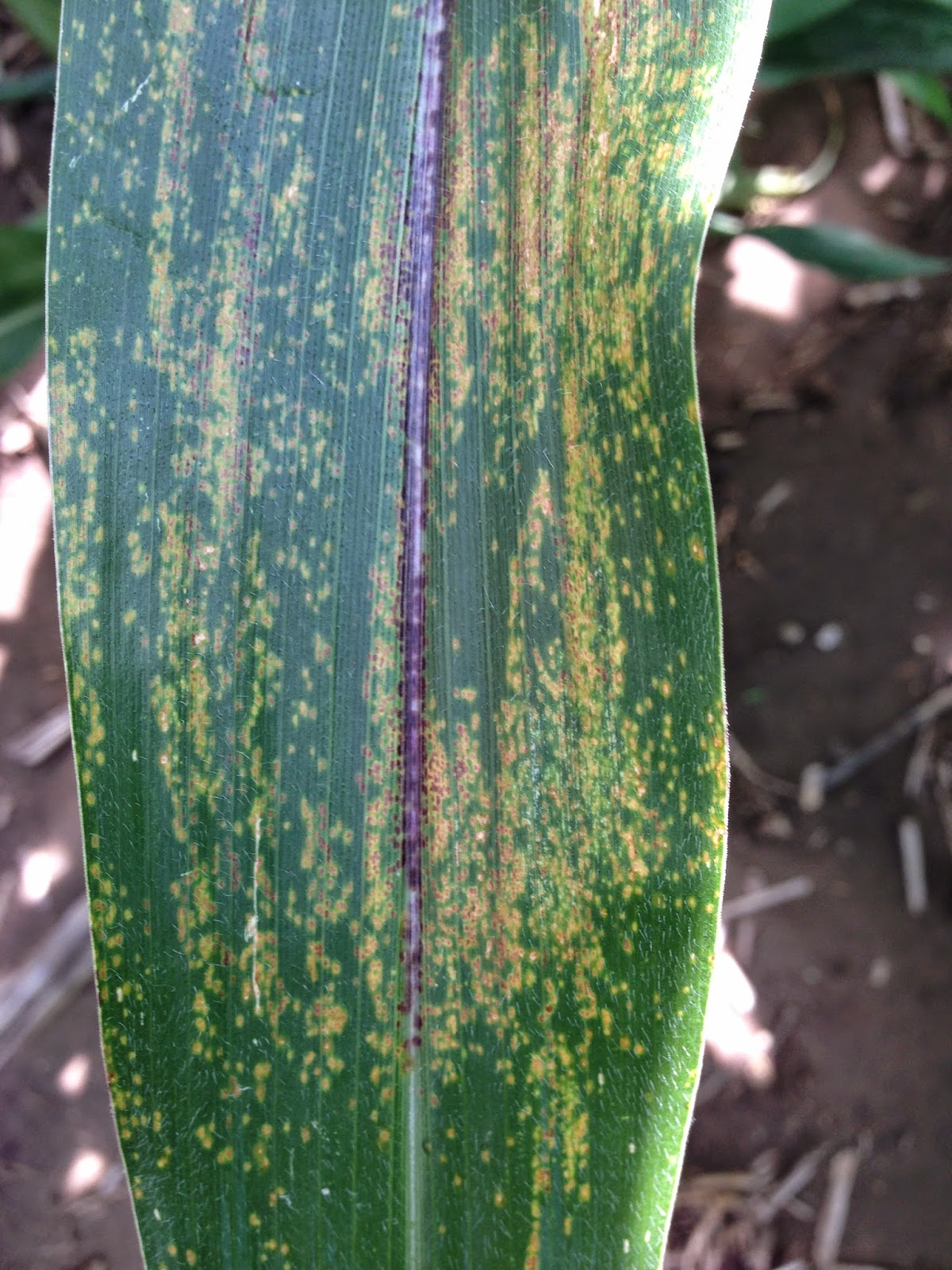 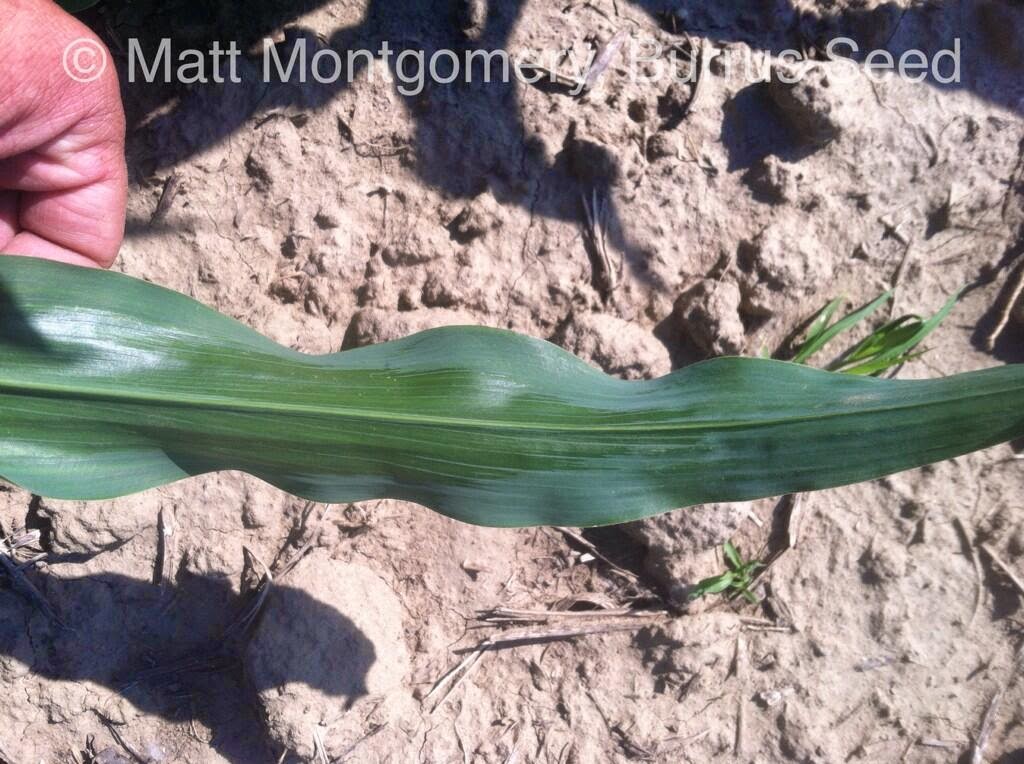 Some weeds such as waterhemp were getting out of control in corn and soybean fields.  Wheat was being harvested in Southern Illinois. 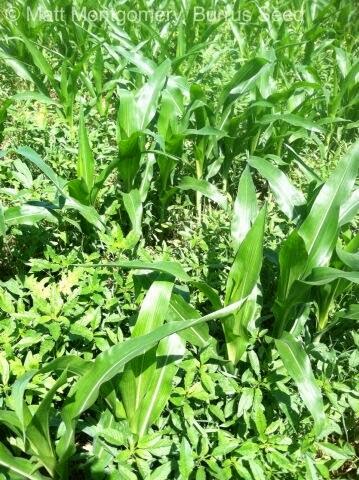 June 28 – Soybean growth finally started to really take off and many fields started to form a canopy.