Pollination "Nick" - One of the Many Things Going Right in 2014 - Will the Trend Continue?


The list of things that “look good” for the corn crop is pretty long at this point.  The crop grew rapidly (once it caught a little heat).  Leaves have been fairly abundant (some might say the canopy is almost too thick, but we’ll take what we can get).  Days have been a little cool, but not too cool to impact yield (we should add the word “yet” to that comment as well).  The list of good things is pretty long and pretty impressive.  It is hard to remember a time when so many things seemed to be going so well over such a wide area (once again apologies to the North and the South of our territory).  One of those good things, one of the things that appears to be going well for the crop is what we call “nick.”


“Nick” is best described as the synchronization between pollen shed and silk emergence.  When the crop “nicks” well, more pollen gets to silk.  More kernels tend to be established, which can lead to good yields.  When the crop “nicks” poorly, fewer kernels are established, which does not bode well for yield.  Figure 1 provides an example of how poor nick can trend toward poor yields.
The graph in Figure 1 is covered with red and blue squares.   Red squares represent the period of time between 50 percent of the Illinois crop displaying silk and 75 percent of the crop displaying silk.  While not an exact representation of nick, it does serve as a convenient proxy for nick.  Blue squares represent the accompanying regional yield that season.   It is pretty easy to see that as nick remains low, regional yield tends to do well.  There is a strong relationship between the two.  When nick went awry in 2012 (when silks failed to emerge rapidly/ pushing out well after pollen shed had started), the result was poor yield.  If nothing else, this graph (the 2012 square in particular) shows that nick is pretty important to establishing yield.
So how are we looking for nick in 2014?  Actually, nick is looking pretty good in 2014.  In the example above, Illinois will likely go from 50 percent silk to 75 percent silk in a matter of days (about five to be exact – source material USDA NASS).  In other words, silks are coming out fast and that typically equates to good nick.  That means that we can place “good nick” in the “2014 good things column.”


It is important to remember that good nick doesn’t mean that the game is over.  The rest of the growing season will still play an incredibly important role.  Consider the two very different directions that this year’s silking/pollination pattern could go.


1.) The first example comes from Missouri.  The state of Missouri started to note silk in fields around the 20th of June.  It started to hit 50 percent silk around the 7th of July.  That pattern looks very similar to what Missouri saw in 2007.  2007 was a pretty acceptable year for corn in most of Missouri.  One would therefore be tempted to say that 2014 might be prone to turning out well (like 2007). 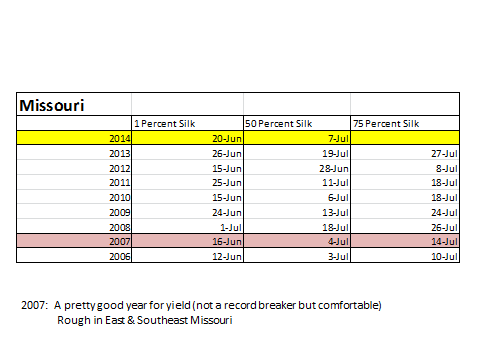 2.) However, Illinois data seems to tell a little different story.  Illinois started to silk around the 23rd of June and by mid-July the corn crop was half silked.  That silking pattern really looks more like 2005, and the state will likely hit 75 percent silk around the 20th of July.  Unlike the Missouri example, this comparable season (2005) was a pretty bad year.  Minus the drought of 2012, 2005 was one of the roughest seasons in the last 9 years. 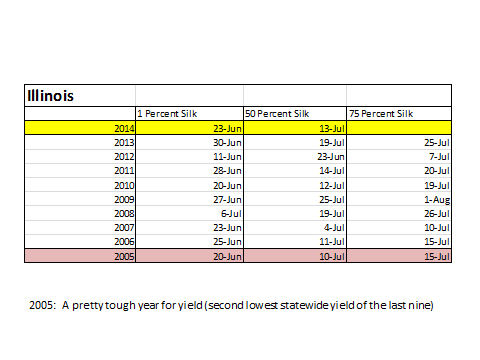 This all lends itself to a point we raised earlier.  Lots and lots of good things have happened and are happening in much of the corn crop (much not all).  Nick is one of those good things.  Fertilization would seem set for very good things, silk clipping pests/diseases may not have much of a window to damage yield, etc.  However, more good things must happen before we brag about what goes in the bin.
Posted by Unknown at 8:21 AM