Spring rains often bring creatures that are not often seen at other times of the year, and the millipede is one of those cyclical pests.  Being from the Missouri territory, there was a rare case of millipedes attacking soybeans within the Burrus Footprint. 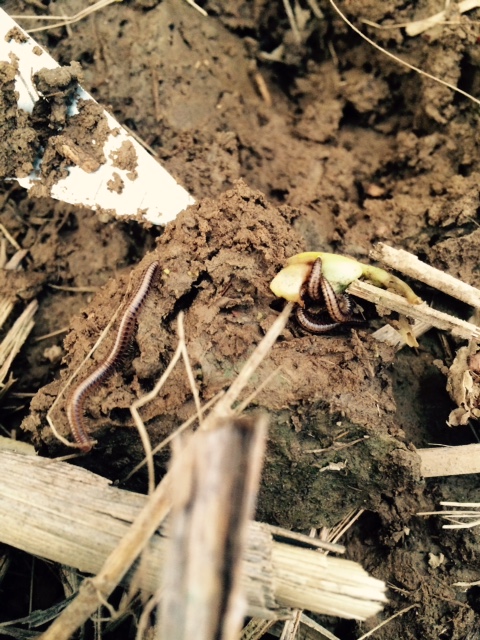 Millipedes are encouraged by high levels of organic matter on the soil surface.  It is also possible that the mild winter led to this pest attack. Normally, millipedes feed on decaying, organic matter. But, when conditions are suitable, millipedes can damage soybean cotyledons and stems prior to emergence of the seedling, and in some cases, kill the seedling.  In many cases of millipede attack, soybean fields were found to be planted into corn residue from the previous year.  Unfortunately, Neonicotinoid insecticide seed treatments do not provide high levels of control of millipedes.

Millipedes usually die within a few days of entering the host, unless there is a source of high moisture and food supply.  The way to get rid of most millipedes is still being determined.  There are no registered pesticides for millipede control.  In some severe cases, growers may need to replant in order to get to a desired plant population. - Courtney Brown, Missouri Burrus Intern
Posted by Unknown at 1:31 PM