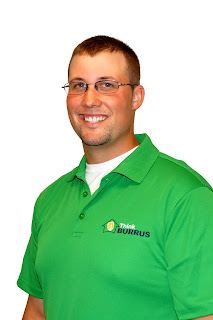 Joining the Burrus team this year is Ted Ballard.  Ted is an Account Manager covering Morgan and Scott counties and is extremely excited to provide the quality of service each farmer expects and deserves.

Ted grew up on a family farm around Carrollton, Illinois where he has been involved in row crop and hay production as well as the livestock industry.  Ted is a diehard St. Louis Cardinals, Blues, and Notre Dame football fan.  He loves to travel and loves the outdoors.  In his spare time, he can be found kayaking, fishing, hunting and hiking.

He is a graduate of Southern Illinois University Carbondale where he obtained both his Bachelor and Master of Science Degrees in Plant, Soil and Agriculture Systems.  While at SIU, Ted was a full-time staff member at the University Farms where he served as Senior Agricultural Research Technician and managed the Colleges Agronomy Research Center.  Here, he worked alongside several different research teams and countless small plot research studies.

Ted has a sincere desire to work with growers and help them be successful.  He understands the hard work, dedication and commitment that is required to ensure your farm’s success and wants to be on your team.  You can reach Ted at (618)-946-0050 and let him help you continue to grow your legacy by planting Burrus in your fields.
Posted by Unknown at 11:42 AM No comments:

2016 Illinois Farm Family of the Year - The Powell Family 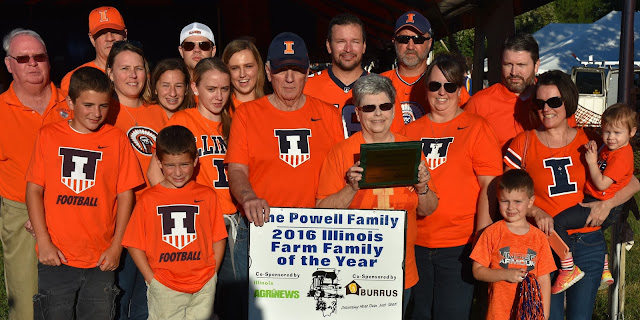 Burrus Hybrids partnered again with Illinois Agri-News to sponsor the 2016 Illinois Farm Family of the Year.  The Jim Powell family from Greene County was chosen for the award, presented on September 10 during University of Illinois' Salute to Agriculture Day. 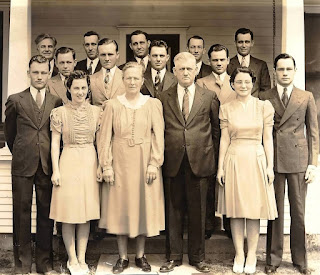 To be on campus for Ag Day was especially meaningful to Jim, having received a Master of Science degree in civil engineering from U of I.  He was also involved in ROTC while in college.  He wanted to carry on the long tradition of military service of his grandfather and six uncles.  The seven brothers served in World War II following the attack on Pearl Harbor and all returned home safely after the conflict.  In their honor, a portion of US Highway 67 is named for them.  Jim’s dream was to be a pilot like his grandfather and father but while in ROTC, he learned he was color blind and wasn’t able to fly.

Jimmy Powell, son of Jim and Janet, along with his wife and children are the fifth generation of the family to live and farm in the Hillview area.   Their farming operation includes corn and soybean row crops and have proactively adapted to agriculture’s ever-changing technology to ensure the next generation can continue to farm and carry on this rich legacy.  They have a 40 head herd of beef cattle.  In addition, the family operates the local elevator. 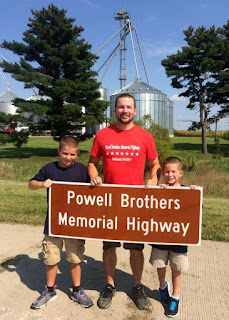 The family has been active in the community serving on various local boards, levee districts, and hospital boards.  They are strong supporters of the local 4-H, FFA and other school-related organizations and clubs.

For all the Powell family does on and off the farm and for the manner in which they do it all together as a family, we are proud to salute them as the 2016 Illinois Farm Family of the Year.

Read more about the Powell family in the Illinois Agri-News article here.
Posted by Unknown at 8:51 AM No comments:

It has been exciting to receive updates from Account Manager Donny Marnin about the yields of the Hoblit 384LL soybean variety in central Missouri. This variety is a top seller not only for its performance, but also because of its maturity range.  Since a 3.8 maturity can be planted within such a large area, during the last several years we have tested and proven that the 384LL can yield in multiple soil types and in multiple environments within the Burrus territory. However, in the recent ILSOY advisor blog:  Sassy, Savvy, and Shrewd Soybean Selection for 2017, I mentioned that some soybean varieties have a sweet spot for certain areas, and the Hoblit 384LL thus far appears to really feel at home in Missouri. 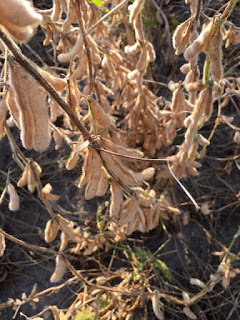 This soybean is of average height with great standability and, of course, alot of pods!  It has a good disease package, but can respond to fungicides if conditions are favorable for leaf diseases during podfill.  Lastly, if you have had a history of SDS or are planting early, we would highly recommend the addition of PS SDS (ILeVO®) seed treatment with this variety.  To learn more about the Burrus LibertyLink® Line up, you can visit the Burrus Soybean Products Selection Guide.

Posted by Unknown at 8:52 AM No comments: 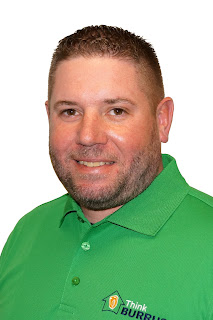 We are excited to introduce a new Burrus Sales Manager, Pete George.  Residing in Utica, Illinois, Pete has the pleasure of working with five Account Mangers serving customers in 20 counties across west central Illinois.  Pete has had the opportunity to be around agriculture the past 19 years with his In-law’s farming operation in LaSalle County.

Pete’s wife, Tricia, is a registered nurse.  Their family includes son Matt, 14, who just started his freshman year of high school and daughter Abbie, 12, who is in 7th grade.  Pete and his wife enjoy watching their kid’s sporting events as they are involved in football, track, basketball and volleyball.  He also enjoys golfing, but his true passion is hunting waterfowl and upland birds with his 6 year old chocolate lab.

Pete joins Burrus with 20 years of sales experience, including working in the grain business for 6 years as a Farm Marketer for Cargill, Inc. covering northern Illinois. Prior to joining Burrus, Pete worked as an Account Manager for DuPont Pioneer in Woodford and Marshall Counties.  Pete’s desire is to help growers be successful by assisting them in making good business decisions.  Pete is proud to be a member of the Burrus team.