Needing to be Advised on Soybeans? Check out ILSoyAdvisor.com 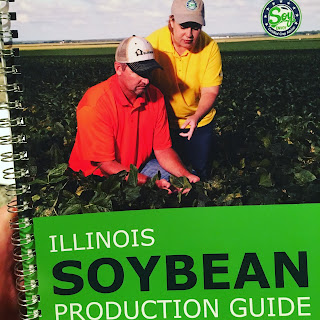 In 2015, to improve Illinois soybean production and profitability, the Illinois Soybean Association (ISA) partnered with the Illinois Certified Crop Adviser Program to launch the Soy CCA Envoys.  The Soy CCA Envoys are a network of Certified Crop Advisers (CCAs) in Illinois who will share management information and recommendations on ILSoyAdvisor.com.  These CCAs work directly with producers and, through partnering with ISA, will share high-yield management strategies and technologies to help growers discover the true profit potential of soybeans.

The Soy CCA Envoys program is funded in part by the Illinois soybean checkoff and is included in ISA's efforts with CCAs to continually improve soybean production in Illinois.  For more information on the Illinois Certified Crop Adviser Program, visit www.ilsoy.org.

In 2016, Stephanie Porter, Burrus Seed Sales Agronomist was asked to be an ILSoy CCA Envoy, along with 5 others across Illinois.  To date, Stephanie has written 22 blogs on www.ilsoy.org website as well as a soybean disease webinar and podcast. To access this information, you can click here or below:

By Stephanie Porter, Soy CCA Envoy, West Central Illinois11/2/2016WeatherThe weather in 2016 set up the potential for some very high soybean yields in many areas of Illinois and to be honest, some have reported the highest...

Why All the Fuss About Soybean Cyst Nematode?

By Stephanie Porter, Soy CCA Envoy, West Central Illinois10/26/2016Unfortunately, soybean cyst nematode (SCN) isn’t being talked about much anymore. It is known to be the #1 threat to soybean yield around the world, and...

By Stephanie Porter, Soy CCA Envoy, West Central Illinois9/29/2016Many of you, while you are harvesting, will also be thinking about the soybean varieties you want to plant next season. Selecting the right variety is...

When will soybean harvest begin?

By Dan Davidson9/3/2016September is here and we are counting the days till soybean harvest. It will be a good harvest with above average yields. So, what will the yield be and...

By Stephanie Porter, Soy CCA Envoy, West Central Illinois8/31/201610. “Soybeans are just a crop that I use to rotate and plant after my corn.” The average soybean yield in Illinois is 55 bu/A, and yet we know that our...

By Dan Davidson8/4/2016Will a Japanese beetle breakout this year force growers to spray?  Our advice – scout your fields to see if beetles are a threat and if treatment is warranted. Photo...

To spray or not to spray fungicides, that is the question

Are your soybeans thirsty and will yields suffer?

By Stephanie Porter, Soy CCA Envoy, West Central Illinois7/21/2016We can easily see corn showing drought symptoms, but signs of soybeans under drought stress may not be as evident. When soybeans suffer from heat and water...

By ISA7/8/2016Stephanie Porter, Soy CCA Envoy from West Central Illinois and Sales Agronomist with Burrus® Hybrids, reviews the most prevalent soybean diseases, all...

By Stephanie Porter, Soy CCA Envoy, West Central Illinois6/22/2016Many are all too aware of Sudden Death Syndrome (SDS). We usually don’t worry about this disease until later in the season, when we can see yellow patches...

By ISA6/14/2016There are six soybean experts who are part of the Soy CCA Envoy program, each specializing in a different area of soybean management. Read their bios below. Lance...

By Stephanie Porter, Soy CCA Envoy, West Central Illinois5/25/2016Recently, I was asked by a colleague which disease pathogens I find most often in early emerging soybeans. To start, I am happy to report that as soybeans...

By Adam Day, Lance Tarochione, Mike Wilson, Stephanie Porter, Terry Wyciskalla5/23/2016The USDA’s May 15 Crop Progress Report states that 36% of U.S. soybeans have been planted as of May 15. In Illinois only 29% of soybean acres have been...

Soybean Inoculants: How to get the most bang for your buck

By Stephanie Porter, Soy CCA Envoy, West Central Illinois4/27/2016Today’s soybean inoculants are not the same as years past. The advancement and introduction of new products, low relative prices and changes to soybean...

By Stephanie Porter, Soy CCA Envoy, West Central Illinois3/16/2016Recently, with the expiration of the U.S. patent of the original Roundup Ready soybean trait (RR1) in 2014 and the third party patent in 2015, many questions...

By Stephanie Porter, Soy CCA Envoy, West Central Illinois2/15/2016There are a number of new herbicide systems coming in soybeans in 2016 and 2017. These join Roundup Ready® and Liberty Link® soybeans on the market. These...

Who Saw Sudden Death Syndrome in Soybeans During 2015?

By Stephanie Porter1/19/2016A common question at many agronomic meetings this winter has been “Why did we not see as much SDS in 2015?” The 2014 season will be remembered as one...

Does it pay to use a soybean seed treatment?

By Stephanie Porter1/11/2016The popularity of soybean seed treatments did not come into play until around 2008. According to Dr. Gary Munkvold, Iowa State University, only about 8%...

By Stephanie Porter1/6/2016During the last two years waterhemp has exploded in soybean fields. Are they herbicide-resistant? Were they too tall to be controlled by a post herbicide...

By Stephanie Porter12/16/2015Some growers will decide to plant back to back soybeans because of recent grain market outlooks. Most sources say that if a grower chooses to go with a...

By Stephanie Porter10/14/2015As a grower some of the most important decisions you make are the varieties you choose. Your quest for yield and profitability really begins with this...
(The above links can be found at http://www.ilsoyadvisor.com/)

Posted by Unknown at 8:18 AM No comments:

In 2016, when we scouted at tassel, disease did not appear critical, especially in areas where it had been dry in June.  But later during grain fill, after massive amounts of rain, diseases such as gray leaf spot and southern rust (in the south) came in full force, especially if susceptible hybrids were planted within heavy residue.

A fungicide application may have been warranted on susceptible hybrids between the corn growth stages of tassel and brown silk.  In some cases, fungicide could have been applied before dent if warranted, to try to preserve corn yield, but in these tight economic times, this was risky.  It has been well documented that the higher percentage disease on the plant, the greater the yield loss.  Leaf disease can also be indirectly correlated to the development of stalk rot. Research has also shown that if there is high disease pressure present and fungicides are applied at the right time, there is a greater potential for a yield response from a fungicide, which can increase your return on investment.

(Western Illinois)
On April 8 and 23, 2016, fungicide trials labeled as dryland and irrigated were planted into fields that had been corn planted after corn near Arenzville, IL by the Burrus research team.  The dryland study consisted of four replications and the irrigated study consisted of three replications of 14 hybrids, which were either treated or a control.  On June 30, 2016, a 14 oz. rate of Headline AMP® fungicide was applied to treated hybrids and no fungicide was applied to the control hybrids.  Even though it was dry in June, before pollination, the dryland study appeared to have very good disease pressure later in the season, due to rain and river bottom environment. There was also a distinct visual difference between the treated and control hybrids.  Hybrids that received a fungicide application appeared to stay green and have overall better health. On average, this fungicide application added a 5 to 9 bu/a increase depending on hybrid and location. 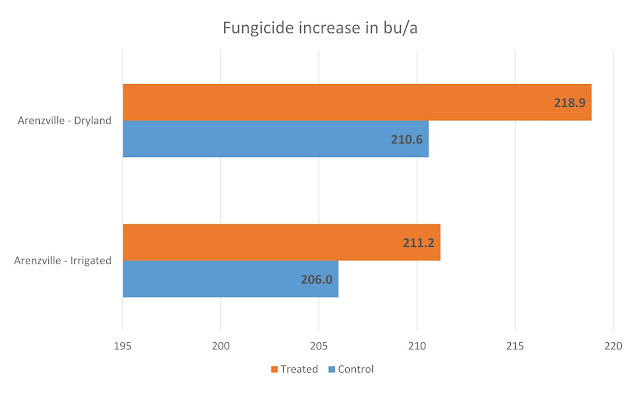 (Eastern Illinois)
On the other side of the state, The BASF Midwest Research Farm (Seymour, IL) conducted a hybrid x fungicide trial in 2016 that included 53 hybrids from 8 different seed companies in a field that was third year corn.  Similar trials were conducted in 2014 and 2015.  The trial was planted April 18th and received adequate rainfall throughout the growing season. Foliar disease pressure was relatively low, but the application of Headline AMP (10 fl oz/A) fungicide at (VT/R1) resulted in improved growth efficiency and stress tolerance (ie., late season stalk integrity, stay green, and extended grainfill).  The average Headline AMP® fungicide yield advantage of the Burrus hybrids was 10 bu/A and the average yield response of all hybrids was 10.7 bu/A. 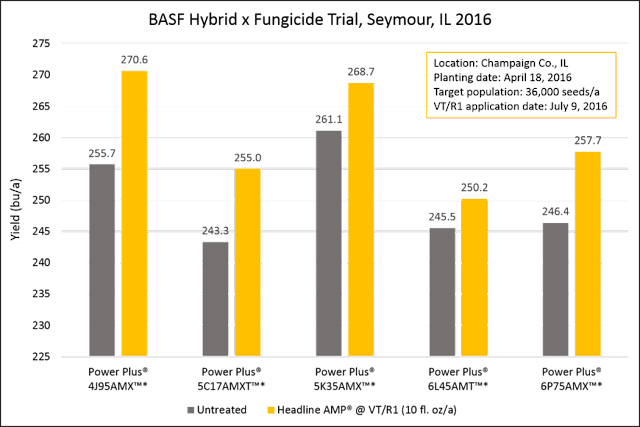 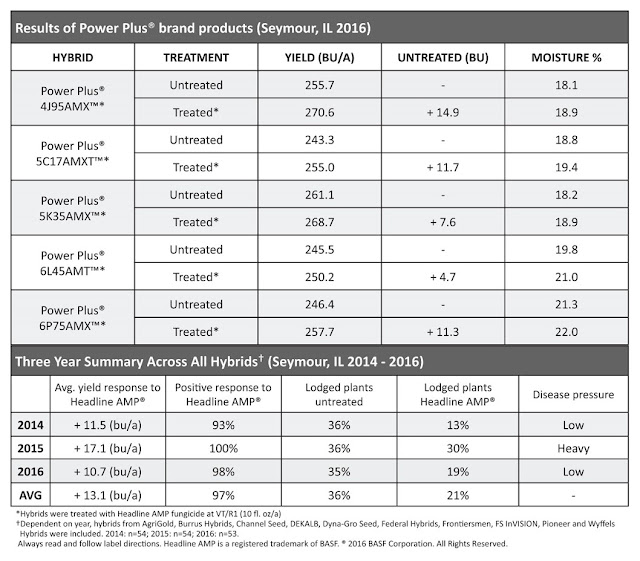 Fungicides can range in price from $16 to $31 per acre which includes fungicide, airplane application, and adjuvants. So, 2016 was a year when a fungicide application could have given a return on investment as well as improve overall plant health and standability.  Remember in some situations, you may want to factor in the cost of increased moisture.

Posted by Unknown at 8:24 AM No comments: