Could Two-spotted Spider Mites be Lurking in your Soybean Field?


Spiders. These creepy crawlers makes a lot of peoples skin crawl with discomfort, but how would you feel if you had to deal with spider mites? Occasionally, we can have a problem of two-spotted spider mites.  They are very, tiny greenish-yellow arachnids, overwinter as adults, and then lay eggs in the spring. The hatching mites establish colonies on the undersides of leaves and produce webbing over the leaf surface, prompting the name “spider” mites.

Spider mites occur during periods of hot weather and drought, when there is low humidity.  Their symptoms can range from silvering, yellowing, browning, lower leaf loss and death, or could possibly be mistaken for drought symptoms.

Drought is a big contender in outbreaks of mites, along with natural enemies, weather, and host quality. This is because drought will enhance the spider mites acceleration of reproduction as well as  movement to a crop from surrounding vegetation as it improves food quality for mites.  Since fungal diseases flourish in wet, cool conditions, drought diminishes the diseases that normally attack spider mites.

Now let’s get to the important stuff, scouting! The best time to scout for spider mites is during times of hot and dry weather.  The first place you should look for mites are in areas where soybeans are stressed.  If you are in an area where the leaves looked sandblasted, take a clipboard with a white piece of paper and tap the leaves on it. After you tap the leaves and there appears to be yellow, brown, or black speckles on the white paper, you probably have found some mites! Crush the speckles on the paper and if they appear to be a reddish-brown spots, then you have spider mites. 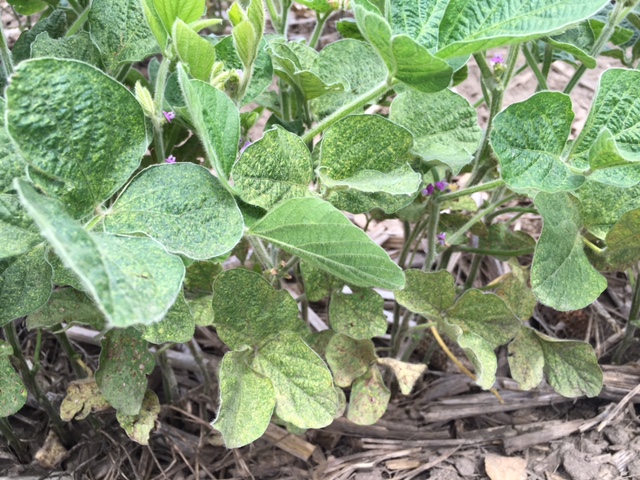 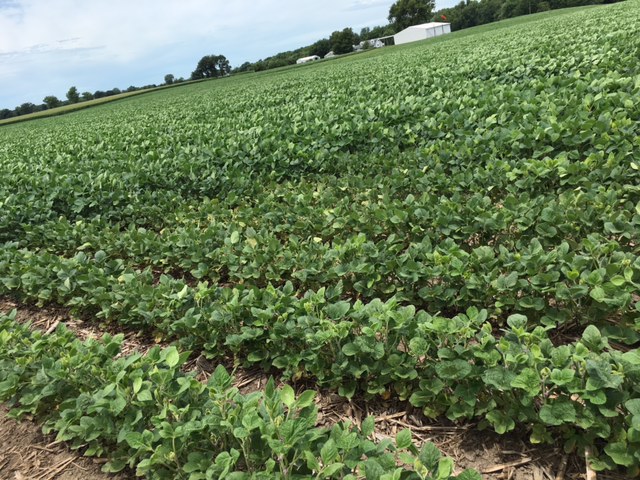 There have not been thresholds established for two spotted spidermites in soybean as of yet, but we do know that we need to protect the canopy during the most critical growth stages during pod and seed development.  Since these pests are "mites", not all insecticides will kill them, so be sure to apply a miticide only in severe infestations.

When recently stumbling across a year-old email from Jim Hughes, I found information worth sharing with our growers. Knowing your genetics is key; for example, early hybrids could work well for a late planting in terms of not only yield, but ability to finish. Power Plus® 2F91™* is a recommended early hybrid example from our line-up.

Below are the whole-trial yield and moisture difference between normal and late-plant at Woodstock during 2014, 2015, and 2016. As you can see, there is still a lot of yield potential with a June 1 planting date. The big differences occur during critical growth stages, such as pollination. For example: in 2012, the late planted corn was much better, because it flowered after the brunt of the heat and drought broke, thus it had a much better seed set and grain-fill opportunity. 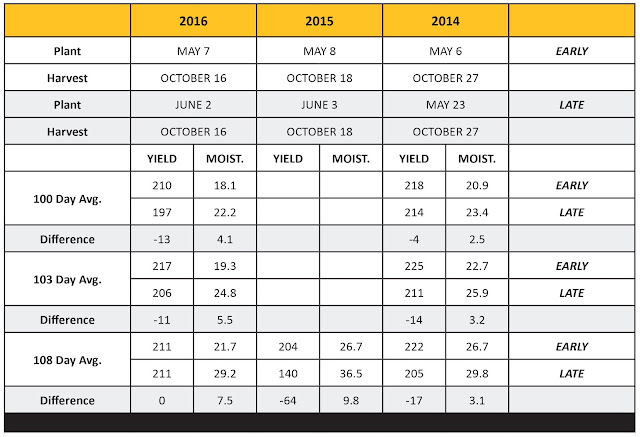 Later planted corn was significantly worse due to lack of moisture late, combined with crushing late disease pressure. This is when fungicide can be very important for later planting corn, but the further reduction in dry down does need to be taken into consideration.  In 2014 and 2016, without a strong bias to early or late, there was only about a 5-10% yield penalty for the later planted.

One huge asterisk here: these late plant trials were intended to be planted late, and went into ideal conditions. Corn mudded in on June 1 is still corn mudded in. We know the penalty from improper seed bed conditions can be severe, regardless of planting date.
Posted by Unknown at 10:35 AM No comments:

Having issues with corn earworm, western bean cutworm or European corn borer on your farm?  This becomes especially important if you have hybrids with no Bt traits or food grade corn.  Depending on your location in the state, the western bean cutworm and corn earworm can attack between July through harvest.   The 1st generation of corn borer can attack from June until mid-July and can be worse on early planted corn. The 2nd generation of corn borer can be worse on later planted corn and can attack from mid-July until harvest.

There is a new way to track insect pressure on your farm, that we are experimenting with at Burrus Seed, called the Z-Trap system. The Z-Trap is a new product produced by Spensa, an agricultural company that develops software to help growers be more aware of what is happening in their fields. The Z-Trap measure insect activity in your area, then deliver pest population data in near-real time.

The Z-Trap is easy to set-up, requiring only a stake to hang the trap and a cellular signal.  In the Z-Trap, you insert a pheromone attraction piece to attract the desired insect.  There are bioimpedance sensors to shock the insect, which then allows it to fall into the holding tank.  The trap measures the electrical impedance of the insect.  Then, the computer built into the onboard controller, processes the signal and validates the target insect.

After an insect is trapped in the Z-trap, it sends the results of what it has just trapped to you via email, web or app.  You can then trace insect pressure by graphs and charts that are produced through Spensa, with data sent directly from your field.
“The Z-Trap system is a way for farmers to use smart insect traps to analyze and predict insect populations in their fields,” says Spensa.   The goal of the Z-Trap is to catch problems early and use pesticides with more precision for increased yields.  Spensa says there is “no substitute for boots in the field.”  But with the Z-Trap, it can give you in-field human judgment for spotting and documenting insect problems.
Johnny Park, President and CEO of Spensa Technologies, which is headquartered at Purdue University, says knowing when to timely apply pesticide is crucial for any crop being grown.  “Mytraps.com, is a software that presents the data to growers and consultants so they can make an informed decision on what to use.”  Park adds that having the information sent straight from Mytraps.com to your phone or computer is a new step in production agriculture.


Burrus Seed has implemented one of these Z-Traps on a test plot in Arenzville.  We look forward to seeing the corn borer pressure that we catch this summer near our conventional corn plot. 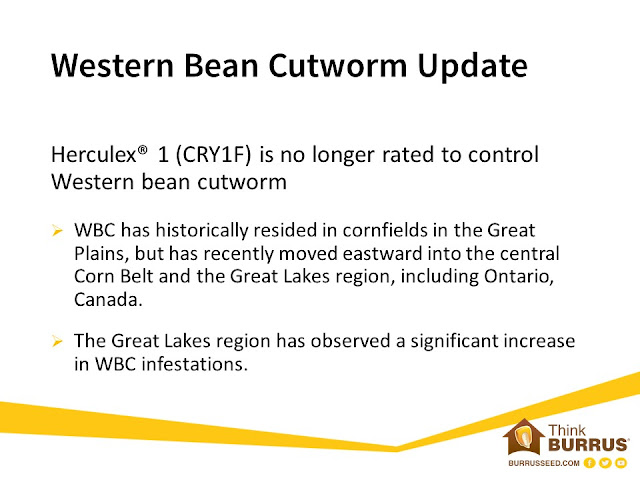 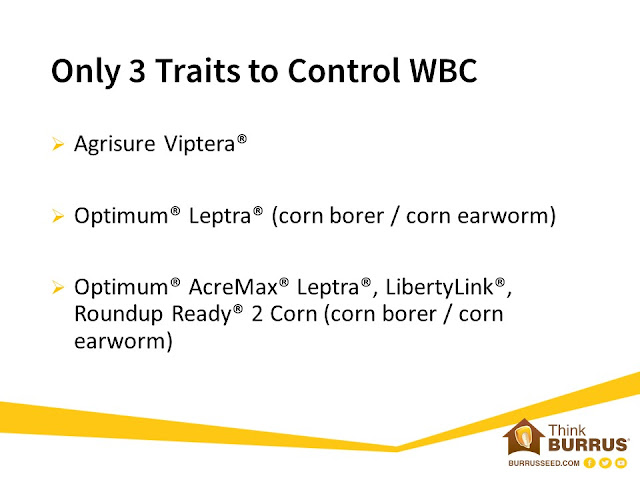 Written by Burrus Agronomy Intern, Griffin Greene
Posted by Unknown at 7:36 AM No comments: